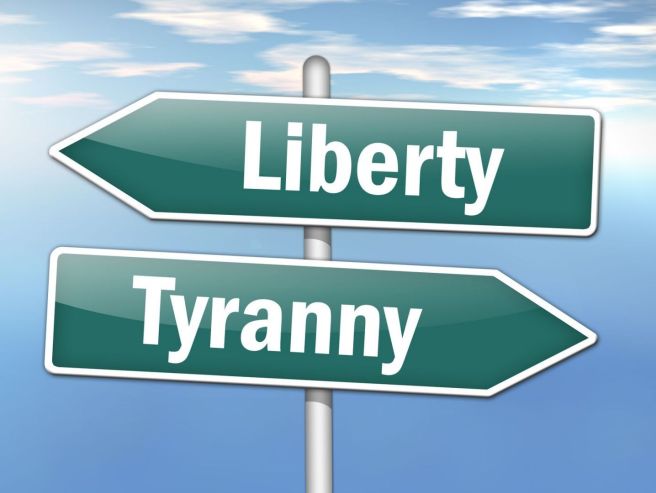 The kind of tyranny that most Americans could never have imagined taking place in our country is indeed happening. And it is happening in response to a virus—a virus about which little is known and recommended courses of action are constantly changing (or are not even in agreement depending on what person or agency you are listening to at any given time). In no small part because of the unknown and the uncertainty, government officials—especially at the state and local levels—are taking drastic action. No one wants to be the one who failed to act and lives were lost as a result. That is understandable. All of us have been in situations before when we had to wrestle with a decision and we were not sure what the right thing to do would be, and for most of us those decisions did not conceivably involve life and death or wide reaching economic repercussions. So I understand that the positions in which our elected officials find themselves is not an enviable one. But uncertainty and fear of the unknown are not legitimate excuses for violating the liberties which Americans hold dear.

In the April 25 print issue of WORLD, Sarah Erdős writes that forty-one U.S. states are under stay-at-home orders. At least six governors are planning to start reopening activities in their states by April 30, according to an article April 20 on The Federalist. These are good signs. Even better is the fact that there were nine states not under stay-at-home orders, according to the Erdős article. But according to an article on Forbes.com, Andrew Cuomo extended the New York stay-at-home order to May 15, which is the same as the duration of Vermont’s order, and eighteen states plus Washington, D.C. have orders that currently extend into May or even June. “Last week, governors from Idaho, Kansas, Indiana, Mississippi, Wisconsin and Missouri all extended their stay-at-home orders to future dates,” the article stated. That means that at the same time six states—Georgia, South Carolina, Alabama, Tennessee, Florida, and Texas—are planning to reopen, six others are extending their shut down. This is contributing to the frustration and confusion. I am fortunate to live in one of the states that has not had a shut-down order, but that puts me in a very distinct minority. And that fact has not prevented me from becoming increasingly concerned about the violation of freedoms that are spreading across our nation.

We are seeing towns implementing checkpoints to see if citizens are really out of their homes for legitimate reasons. Police patrols are on the lookout for people doing anything they should not be doing—and I am not talking about actual crimes. Erdős described a man in Edcouch, Texas being escorted home from the pharmacy by police in order to ensure that he actually went straight home. If someone would have suggested just two months ago that this would be happening in the United States of America they would have been deemed a lunatic, not a prophet…but look where we are now.

On April 15, Andrew Napolitano wrote an editorial for The Washington Times headlined, “Do governors have the right to decide which activities are essential?” He begins his commentary by stating that we are witnessing “manifested inability of elected officials to resist the temptation of totalitarianism.” Sadly, he is right. Incredibly some of the state constitutions have given the governors of those states the powers that they are now abusing. In Washington state, according to Erdős, state statute allows the governor, during an emergency, to “impose a curfew, suspend state laws, and ban gatherings in open spaces provided the restrictions do not ‘conflict with the rights, under the First Amendment, of freedom of speech or of the people to peaceably assemble.’” Of course, therein lies perhaps the biggest problem of all: many elected officials are not only implementing restrictions that conflict with those rights, that absolutely trample them.

Not only have many state and local governments attempted to restrict religious gatherings, Mendocino County, CA, has gone so far as to issue a thirteen-page order, in effect through May 4, that even restricts the ability of churches to livestream their services (which they are providing due to not being allowed to meet in person). The order states, “Only four individuals may be present for the live event. All others must participate remotely.” And it gets worse… “No singing or use of wind instruments, harmonicas, or other instruments that could spread COVID-19 through projected droplets shall be permitted unless the recording of the event is done at one’s residence, and involving only the members of one’s household or living unit,” the order says. If I was making that up it would be funny, but I am not and it is anything but. It is vexatious. It should offend anyone who loves liberty.

Stay tuned, because over the next few days I will be posting a hall of shame I am calling Profiles of Tyranny.

Jason B. Watson is a follower of Christ who enjoys "thinking out loud" when he has time to do so. View all posts by jbwatson

The opinions expressed on this web site are exclusively those of the author, Jason B. Watson, and should not be interpreted as representing the ministry he currently serves or those he has previously served. The comments on the blog entries are the opinions of the individuals who comment. They may or may not be consistent with the opinions of Jason B. Watson. Comments are welcome provided they are respectful and contribute to the ongoing discussion.
Loading Comments...
Comment
×
<span>%d</span> bloggers like this: