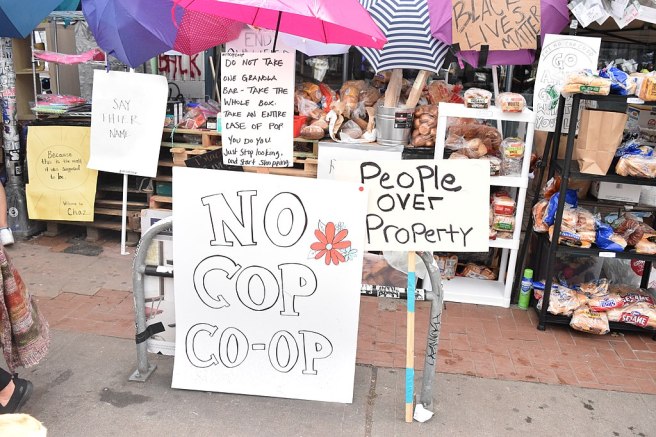 I have seen quite a bit of hypocridity coming out of Seattle lately. You may be thinking you have never heard of hypocridity, and that’s true—because it is a term I just made up. It is a blending of hypocrisy and stupidity, and it is a dangerous combination.

More than a week ago the Capitol Hill Autonomous Zone, or CHAZ, was “formed in the wake of police giving up the week-long blockade of the East Precinct,” according to a June 9 post on the Capitol Hill Seattle blog. Per a tweet from Mayor Jenny Durkan, the abandonment of the precinct was “an effort to proactively de-escalate interactions between protestors and law enforcement outside the East Precinct.” She went further than that, however, saying, “Keeping demonstrations peaceful must be a joint effort between our community members and law enforcement. I am hopeful that tonight, with these operational changes, our city can peacefully move forward together.”

Here is a beautiful example of stupidity. According to Durkan, the “joint effort” necessary to maintain a peaceful demonstration is the evacuation of police so that the protesters can do whatever they want. But that is not a joint effort. That is total capitulation. Just imagine what would happen if the world was suddenly full of “joint efforts” in which one side caved completely to the other!

Per the same blog post, Seattle Fire Department personnel “removed ‘many personal effects of the officers normally stationed in the East Precinct’ as part of a ‘proactive effort to guard against potential damage or fire.’” That doesn’t sound like they were anticipating a peaceful demonstration, does it?

An update to the blog described Tuesday morning, June 9 this way:

The first morning brought a new configuration to the streets. The police barricades and walls left behind have provided protesters the resources they need to create their own path through the neighborhood. Barriers have been dragged into a zig zag maze to block traffic from passing through 12th Ave or up and down E Pine with a steady stream of cars and trucks performing u-turns and three-point turns to avoid the blockades. Tent shelters have been put up to help keep volunteers dry at the edges of the core around 12th and Pine. At one on the southeast corner of the intersection, a few people sat around while one approached CHS and encouraged “white people” to come to the scene and help them hold the block. Above the walled-off entrance to the building, the sign has been spray painted to now read “SEATTLE PEOPLE DEPARTMENT EAST PRECINCT.”

In other words, the peaceful demonstration had tuned into a takeover.

Evan Bush wrote a piece for the Seattle Times on June 10 that said, in part, “A new protest society — centered on a handful of blocks in Seattle’s quirky, lefty Capitol Hill — has been born from the demonstrations that pushed the Seattle Police Department out of its East Precinct building.” The same article quoted protester Sarah Tornai saying that people desire to be “autonomous from the way the Seattle Police Department has been policing them.”

When CNN’s Chris Cuomo asked Jenny Durkan on June 11 how long the autonomous zone situation would continue, Durkan replied, ““I don’t know. We could have a Summer of Love!”

Seattle’s KOMO news reported that Seattle Police Chief Carmen Best said, also on June 11, “There’s no game plan for this. This is absolutely unprecedented. I’ve never seen people force a decision to be made to move officers out of this facility in this manner. So, there is no game plan, there couldn’t be, because it’s unimaginable, what’s happening to us right now.” Best added that police response time to priority calls inside the zone had more than tripled, from five minutes to eighteen, while the response time to secondary calls was nearly an hour. “There are people’s lives who are affected,” she said. “Emergency calls, which often means somebody’s being assaulted, sometimes it’s a rape, sometimes it’s a robbery, but something bad is happening if it’s a top priority call, and we’re not able to get there….”

That doesn’t sound much like a summer of love…

In a June 16 piece for Slate, Jane C. Hu wrote that after hearing rumors and seeing reports that there were ID checks and armed individuals patrolling the streets, she went to check it out for herself. She reported barricades, but no ID checks. She also reported, “it’s obvious to anyone in Seattle that the zone is not autonomous.” The people inside the zone are still using water and electricity, for example. This may be why the preferred name was switched from CHAZ to CHOP—the Capitol Hill Occupied Protest.

Hu added that while there were no armed guards or ID checks, “if people recognize you and they’re not fans of your work, there is a chance you’ll be confronted by a crowd asking you to leave.” In other words, anyone and everyone is welcome…as long as the crowd does not dislike you.

Hu also described the No-Cop Co-op. “The ‘No Cop Co-Op’ had piles of bread, jam, oats, and peanut butter, with a sign encouraging people to avail themselves: “Do not take one granola bar—take the whole box. Take an entire case of pop. You do you. Just stop looking and start shopping,” she wrote.

Hmmm. You do you…but if people recognize you and don’t like you, you will be asked to leave. Makes sense….

Then, also on June 16, FOX News reported between the city and the CHOP protesters that would “remove temporary roadblocks and replace them with concrete barriers.” The barriers would be installed by the Seattle Department of Transportation and would be placed in such a way that emergency vehicles would be able to access the area.

So, Seattle city services would install the barricades, and Seattle emergency vehicles would be able to provide services in the area… Not much autonomy in that arrangement, is there?

Nevertheless, Mayor Durkan still thinks its all great. “Seattle is the best city in America. Don’t let Fox News distort the truth. And take a look at the real truth of the ‘nation formerly known as downtown Seattle,’” she tweeted on June 17. That was two days after a crowd broke down a fence and demanded that the owners of an auto repair business release a man they had caught after he broken into the business and tried to start a fire. More than a dozen 911 calls were placed by the business owners, but no emergency personnel arrived. The Fire Chief later visited and said he was looking into why fire personnel had not responded to the calls. The answer later emerged; per FOX News, “the fire team was waiting on a police escort to the business, but police did not want to enter the area to escalate tensions. Seattle police took a report of the incident and sent officers to the periphery, but did not engage with the business owners or protesters or take the suspect into custody.”

Ami Horowitz, who says he calls the CHAZ/CHOP group the Confederacy of Dunces, produced a digital short (available on YouTube) in which he conducted interviews on the street inside the zone. One masked individual told him, “If there is no change, there might be a lot more destroying until there is.” This individual went on to say that he thinks some “some destruction and looting kinda sends the message to the people. And breaking their sh*t is justified.” Indeed it does send a message… This individual was accompanied by a woman who said, “I mean, white people owned slaves, so fu*k them.”

Both of these folks were white, by the way….

Jaiden Grayson, identified as one of the leaders, said that she does not show up to peacefully protest, but to “disrupt until my demands are met. You cannot rebuild until you break it all the way down.” She continued, “Respond to the demands of the people, or prepare to be met with any means necessary. By any means necessary.” When Horowitz said, “That’s not just a slogan…” Grayson replied, “No. It’s not a slogan. It’s not even a warning. I’m letting people know what comes next.” Horowitz pressed Grayson further, and she said “absolutely” the police, the courts and entire criminal justice system needs to be abolished.

“And then what?” Horowitz asked.

“Again, you’re asking a question that cannot be answered,” Grayson answered. “The unraveling that happens to that system is also exactly what will fuel the black minds in the black bodies that will recreate a new world.”

Let’s ignore the fact that you cannot recreate something new. Grayson clearly has a vision for a “new world” that goes beyond what most of the folks in CHOP have in mind. Anyone happy to live in a place that has, as NPR News reported today, “established a food co-op, a community garden, medical stations, a speaker’s stage, movie nights, book exchanges and round-the-clock security patrols” in a week’s time is simply living out a silly dream and abandoning reality. There seems to be plenty of talk, but none of it addresses work, income, ownership or responsibility. Indeed, according to Hannah Allam’s NPR report, many black activists—like Grayson—are now concerned that CHAZ/CHOP is now “a majority-white protest movement whose camp has taken on the feel of a neighborhood block party that’s periodically interrupted by chants of ‘Black Lives Matter!’”

Let’s stop the hypocridity and get serious about problem solving. An autonomous zone or occupied protest is not going to accomplish that.

Jason B. Watson is a follower of Christ who enjoys "thinking out loud" when he has time to do so. View all posts by jbwatson

The opinions expressed on this web site are exclusively those of the author, Jason B. Watson, and should not be interpreted as representing the ministry he currently serves or those he has previously served. The comments on the blog entries are the opinions of the individuals who comment. They may or may not be consistent with the opinions of Jason B. Watson. Comments are welcome provided they are respectful and contribute to the ongoing discussion.
Loading Comments...
%d bloggers like this: